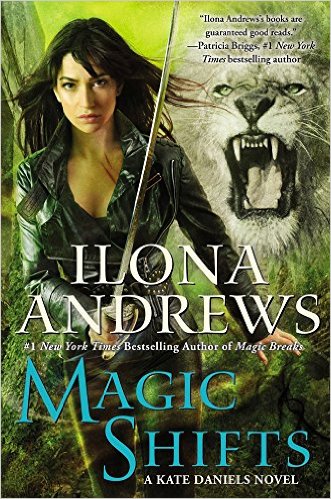 This won’t be a proper review. Magic Shifts is the eighth book in a long-running urban fantasy series written Ilona Andrews (otherwise known as Ilona and her husband Gordon), meaning that several plot points have been met since they were first introduced and a few characters have already died. So instead I’m going to use Magic Shifts to talk about the series as a whole.

A bit of background: I love this series. Love it. It is my go-to escapist comfort/crack series. I love the protagonist Kate Daniels (a snarky badass fighter and magic user) and while I’m not as into her love interest Curran (a werelion known as the Beast Lord of the Pack, an autonomous governing group of shapeshifters), I love Kate and Curran together. I love how magic works in this universe (semi-post-apocalyptic future set in Atlanta in which magic and technology vie for dominance in “waves”—when the magic is “on,” technology is “off,” and vice versa), I love the endgame the series is leading up to, and I love love love the cast of characters that make up this universe.

Now that that’s established, I will give some actual specifics of what I love about these books. Needless to say, there will be ginormous spoilers, particularly for the previous book Magic Breaks.

1) I saw a post on Tumblr a couple weeks ago expressing the poster’s desire for stories about romantic relationships that didn’t focus solely on the meet-up and getting together, but continued after the getting-together occurs and exploring all the ups and downs of forging a working relationship. That kind of romance narrative? Is this series. Kate and Curran have been together since book 4, and in the following three books, Kate had to adjust to a pile of unwanted responsibilities as the consort to the Beast Lord and co-ruler of the largest pack of shapeshifters in the South. The last book ended with Curran’s resignation and the two of them purchasing a house in the suburbs, and so Magic Shifts is the first book to give Kate, Curran, and Kate’s adopted daughter Julie the room to function as a nice, quiet suburban family—or try to, at any rate. Julie complains about why can’t she have a different horse to ride to school on, hers is so mean. Kate and Curran butt heads when it comes to keeping each other informed about where the other is, especially when it comes to Julie. (The last time Curran pulled Julie from school without telling her, Kate ended up in a magical battle that left her nearly dead from micro-strokes.) I love that I get to read about a newly come-together family still working out how they’re actually supposed to function as a family, which brings me to my next point:

2) I love how the mundane concerns are juxtaposed with the scary, dangerous magical battles going on in the background. This series, and Magic Shifts in particular, read like an especially good episode of Buffy, where the supernatural plots and mundane character concerns are intertwined and directly play off each other. Parent-child relationships make up much of Magic Shift’s plot and character development—the story starts when a George, a shapeshifter and daughter of Mahon, the kodiak were-bear, the Pack’s executioner, and Curran’s foster father, comes to Kate and Curran for help finding her missing fiance who Mahon disapproves of and won’t lift a finger to search for. George’s predicament causes Curran to question his own relationship to his foster-father and how much of it was Mahon playing kingmaker and manipulating Curran to be the kind of leader he thought was best and cutting him off when Curran began to refuse. Given that’s Curran’s experience of his fatherhood, what’s he going to do if he ever has a son? Kate has her own bad fortune when it comes to parents. As Kate puts it, “My only living blood relative is a megalomaniac with cosmic power and an unshakable belief that he knows best,” a fact Kate can’t afford to forget as he sets up awkward family dinners at Applebee’s, nags her to just get married already, and gives her fatherly advice about how to go up against a rogue djinn.

3) More mundanities that I love exist in this series—lawyering. There is so much lawyering and politicking due to all the new organizations that sprung up to deal with the chaos and property damage the magic flares wreaked upon the landscape. Half of Kate’s battles consist of her throwing either her legal knowledge or that of the Pack’s lawyers regarding law enforcement, the Mercenary guild, city ordinances, taxes, and especially Pack governance laws surrounding hierarchies of leadership into her opponents’ faces in order to get the results she needs or to diffuse tense situations.

4) I mentioned the world-building way back when in my introduction. Here’s some more about it: all the different magical systems and creatures are derived from multiple real-life mythologies and religions, including Celtic, Scandinavian, Hindu, Muslim, Slavic, Jewish mysticism, and probably some others I’m forgetting at this current moment. All the typical urban fantasy creature are are given ingenious, pseudo-scientific spins—both vampires and shapeshifters are the result of humans becoming infected with the Immortus pathogen and the Lyc-V virus, respectively. The former turns humans into undead, brainless husks whose minds and bloodlust are controlled by an organization known as the People, and the latter turns humans into shapeshifters if they’re lucky and overrides their system and causes them to turn “loup” and become an uncontrollable homicidal killing machine if they’re not.

6) This is going to be a big one: Over the course of the series, we’ve learned about how Kate’s childhood was nothing short of a gauntlet in which her guardian deliberately raised and trained her to be a killing machine and to develop emotional ties to no one so she would be prepared to do whatever it took to kill her father. She was trained to recognize that her very existence is a danger to anyone who gets close to her.

And what does Kate do over the course of eight books? She meets Curran, the man whom she falls in love with despite knowing he’s probably going to die some day trying to fight her father alongside her. She meets Julie, a street kid capable of sensing all sorts of magic, and adopts her as her daughter. She meets  Andrea Nash, a shapeshifter who’s a crack shot and her new best friend. Then there’s Derek, a young werewolf who’s absolutely devoted to her, Aunt B, the leader of Clan Bouda, Barabas, the Pack’s lawyer, Dr. Doolittle (take one guess as to what his job is), Jim, Dali, Raphael, Ascanio, her attack poodle Grendel (seriously) and her donkey Cuddles, and even (begrudgingly) Ghastek, one of the Masters of the Vampires, whom she loathes. I haven’t even scratched the surface—there are so many characters who pop in and out, lending their expertise and snark as the situation warrants, and it’s fantastic.

Of course, it’s a disaster for Kate because suddenly she has a community, friends, family, loved ones—fuck at this point she has an entire city—who are in danger of being killed because of who she is and who her father is, and how things are fated to go down between them. She went from having nothing to lose to have everything, and with each new responsibility she takes on, the more she lets herself yearn for a future where she and her family are safe—well, the harder she’s going to have to fight for what she wants, and the stakes are going to continue getting higher and higher.

There are people for whom this series is not going to work—mainly people who aren’t interested in urban fantasy and its accompanying tropes and writing styles. The first two books are especially mish-mash in content as the authors work out the kinks and wrestle all the world-building, plot points, and characters into a cohesive narrative. The plots are primarily action-oriented with very little down-time, and while the actual magical opponents are always unique, the fighting itself is repetitive at times, as are certain character descriptions. (There’s only so many ways to describe certain Pack members as these guys will kill you and eviscerate you five times before breakfast or they’re so hot they will make the entire female population combust before you start thinking that you get it already.) If you don’t have any tolerance for alpha love interests, you’re really not going to like Curran. The snark is a tough one—it’s pretty constant, and it does get grating, but there are a lot of great one-liners, and given how dark and despairing the plots of these books can get, the presence of snark is definitely appreciated during those times.

For me, what it comes down to is that this series hits all the buttons I need for escapism. I appreciate that every year I can settle down into a new book filled with over-the-top insane plots filled with magic, gods, shapeshifters, vampires, politics, lawyering, and snarky characters being snarky and having feelings behind all the snark. I love getting to read about a female character who, no matter how hard she goes down fighting, always finds a way to get back up again to do right by the people who need her help and need her alive. These books won’t work for everyone, but they sure as hell work for me.