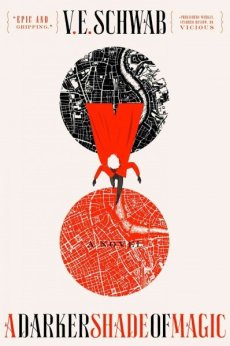 This is the story of Delilah Bard.

Or rather, I wish it were. She shares the protagonist title alongside Kell, the traveler and Antari.

But Delilah is the interesting one. She’s the one with a mission. The one who has a dream of one day owning her own sailing vessel, captaining her very own pirate ship as she sails the seas of all the worlds.

Delilah is the practical, hard-hearted street thief cross-dressing as a boy on the streets of London. When she unknowingly pickpockets Kell, she steals a powerful magical artifact that ties her destiny to his and gives her an opportunity of adventure and magic. And in the end, Delilah does get her own ship, and sets out to explore all the lands unknown to her.

Delilah Bard is, for me, the emotional center of A Darker Shade of Magic. She goes after what she wants. If she wants to go on an adventure with Kell between the Londons, she’s bloody well going to do that. And if that adventure involves helping Kell foil a magical plot, fighting alongside him, and putting herself in danger to save him and his family, then that’s what she’s going to do. She hates to owe anything to anyone, hates accepting help or charity even from those who care about her, yet she risks her life for entire worlds that aren’t her own. She’s a complex character who grows and evolves over the course of the story, yet never loses the core of who she is—a thief and an adventurer.

Kell is ostensibly the main protagonist, an Antari (otherwise known as a blood mage), one of the very few people left with the ability to travel between worlds. In a universe with parallel worlds, all of which contain a capital city of London, Kell serves as ambassador to Red London (the vibrant, magical one), delivering messages to the rulers of Grey London (our very own early 19th-century, magic-less London) and White London (a brutal London starved of magic and ruled by two power-hungry, sadistic monarchs.) There’s also Black London, but that world was overrun by magic, and its portal was shut down centuries ago. Nothing and no one goes in or out.

Kell is clever, experienced, and reckless. Operating a smuggling business parallel to his ambassadorial duties, Kell gets caught up in a dangerous plot involving a powerful magical artifact from Black London that could spell the doom of Red London’s royal family—his family.

At the end of the day, Kell is the more shallow of the two protagonists. To give him credit, he is a fun and empathetic character with a whole bunch of angst about his family situation, his magic, and his feelings of responsibility towards his adoptive brother the Crown Prince, as well as the entirety of Red London. However, most of what he does is run around the Londons getting hurt, feeling guilty over his feelings and his actions, doing magic, and getting hurt some more. He’s not 100% an angst-bucket, but he also has few other traits to recommend him. (Though I will admit I was shipping Kell and Rhy, his adoptive brother, with a passion bordering on a vengeance within the first few chapters.)

If anything, his characterization resembles the world-building of Red London and White London. Both cities are drawn in rough sketches on polar opposite ends of the magic spectrum—Red London thrives from its magic; White London is starved and vicious from its lack. Red London has kind and benevolent rulers; White London has ruthless mercenary-like rulers who subjugated and murdered their way to the top. There’s not much depth beyond this established binary.

Don’t get me wrong, I love how V.E. Schwab created a fresh take on alternate/parallel universes—rather than having multiple worlds that mirror one another and deviate in one specific way, each of her worlds are entirely different—the only thing they share in common is a capital city named London. And there’s a lot of fun to be had as Kell and Delilah explore and fight their way through each London with its different magic and cultural norms. But compared to Grey London (which has the advantage of being a historical, real-life London that requires less overt world-building for readers to be able to visualize), Red and White London feel underdeveloped.

Still, A Darker Shade of Magic was a fun read, and I am excited for the second book in this series. Based on how the book ended and the available synopsis, it’s going to explore more of the different realms beyond the Londons, there’s going to be more magic, and Black London is going to come into play even more so than before.

Mostly though, I’m excited to see what Delilah Bard has become and who she’s going to continue to grow into. And what kind of trouble she and Kell are going to get themselves into.

(Also, as a side note, this book’s cover and that of its sequel are fantastic.)

2 thoughts on “Review: A Darker Shade of Magic by V.E. Schwab”