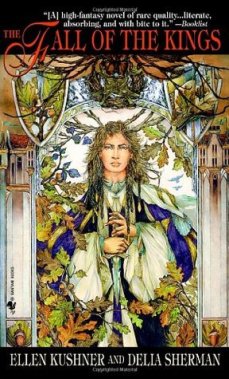 Remember two months ago how I wrote in my review of Swordspoint that I hoped to read The Fall of the Kings very soon? Yeah, that took a while.

Reading these books for the first time has led me to familiarize myself with their unusual history. Swordspoint, the first book set in the world containing the city of Riverside, was published in 1987. The Fall of the Kings is the second book in chronological publishing order (2002) but not in linear narrative order, taking place eighty or so years after Swordspoint, whereas the third book in this loosely connected series, The Privilege of the Sword, takes place only a couple decades after Swordspoint. As all three books were written to be read as standalones, it doesn’t matter in which order one reads them. I decided to go with chronological publishing order, in part because I was curious how the gaps in time between the writing and publishing the three books might affect each respective novel.

The Fall of the Kings differs from Swordspoint in three ways:

Basil St Cloud is a doctor of ancient history at the University who specializes in the history of the Union, the act in which the kingdoms of the wild North and the genteel South came together to form a single country, long before the eradication of kings and wizards and the ascent of the nobility as sole rulers. Young for his profession and notorious for his unconventional (leaning towards brazenly defiant) methods of scholarship, Basil’s love of uncovering the truth using archival research leads him down an unexpected path concerning the historical fate of those kings and wizards and the questionable existence of magic.

Theron Campion is the witty, clever, and aimless, perpetual student of the University, as well as the heir to the current duchess of Tremontaine. He and Basil become passionate, devoted lovers, but soon their relationship develops into something more primal as the two of them tap into the very power hinted at in old records. Unknown to Basil and Theron, the two of them have become the center of a growing movement that unwaveringly believes the land is in desperate need of a king—and a target by those who oppose it.

All the things I loved in Swordspoint are back in The Fall of the Kings: gorgeous writing and imagery, clever and pointed dialogue, entertaining characters, and a world I’ve already come to love losing myself in. There are also some new additions I loved even more, which is another way of saying that The Fall of the Kings is a fantastic book for anyone who is a historian or has an interest in historical scholarship.

Underpinning the entirety of the novel is the question of truth and by which means do historians determine the truth and shape the resulting narrative. Unlike his colleagues, who prefer to parrot arguments originating from a select group of historians whose narratives have become enshrined as fact, Basil is pioneering the use of archival research in the form of long-ignored letters and personal documents, many of which have lead him to question the veracity of these long-accepted historical narratives upheld by his fellow doctors and championed by the nobility. Because I am a nerd who loves the history of historiography (I took an entire junior seminar course on the subject), I love how the debate over historical scholarship and methodology lies at the heart of the novel, informing the plot and various personal relationships, and (of course) political/social machinations that arise out of the threat of a new historical narrative that could destabilize the nobility’s claim to governance.

I also loved getting an inside look of the city’s University and its own set of politics. The University features a highly enjoyable cast of characters made up of professors and students, whose different backgrounds and personalities combined with Kushner’s skill (and presumably Sherman’s as well) of writing clever, witty banter makes for delightful reading of their shenanigans. My favorites were Basil’s posse of student-apprentices, whose friendships are balancing act between genial, cranky, argumentative, and unified in their support of their teacher.

As for Basil St Cloud himself, I loved his stance towards historical scholarship and what he stood for. As a character, his head was too far up in the clouds for me, and he’s surprisingly and somewhat annoyingly oblivious about his behavior and its effect on his colleagues and students. More interesting was Theron Campion and his attempts to carve an identity for himself amidst obligations that come of being a noble and the heir to Tremontaine without even knowing what he wants to be or who he is without those layers. Basil and Theron’s BDSM-y relationship becomes yet another arena in which Theron creates a space for himself initially to be someone without expectations. But soon their connection takes on a mythical, elemental quality, and Theron has to struggle under another expectation that he take on an identity he had no idea he possessed.

Another of my favorite things about this book (this review really is just a List of Things I Loved about The Fall of the Kings) is its successful incorporation of the myths of the Northern kings and wizards and rituals that test the kings’ worth into the world-building of this universe, when Swordspoint had absolutely zero hints of any magic. This isn’t to say that Swordspoint was a worse book because of it, or that a fantasy novel requires magic to be considered as such. Ellen Kushner and Delia Sherman handle the the question of magic in a particularly clever manner: Magic’s existence has to be proved in the first place, since wizards no longer exist to demonstrate their abilities—but if wizards no longer exist and almost zero record of them remains, how can anyone prove magic exists and that wizards were not charlatans like the accepted narrative accuses them of being? Again, historical scholarship and methodology inform how each character interacts with the legends of kings and wizards and magic, and these interactions determine which historical narrative gets upheld as both a personal and a political truth.

(The myths themselves are very Golden Bough-esque, what with the importance of blood and sex and sacrifice to the land itself in determining who is fit to rule it.)

Although the cast of characters is once again predominantly male, I was pleased to see more female characters than were present in the first book (some even had POV sections!), such as the Duchess Katherine Tremontaine and Lady Sophia Campion, Theron’s mother, who are each a mix of conventional and unconventional social qualities deemed appropriate for women. And then there’s the oh-so-amazing Jessica Campion, Theron’s half-sister and the bastard of the deceased Mad Duke of Tremontaine. She is a dashing and,highly successful pirate who plays by her own rules, follows her own hidden agenda, and steals every single scene she’s in. I want an entire novel about her—I don’t know if The Privilege of the Sword will give me that, but I sincerely hope it does.

I do want to make note of one sour instance in The Fall of the Kings, which is that in a blink-and-you’ll-miss-it moment, Theron sexually assaults his fiancée when, unbeknownst to him, his mind and body are ensnared by powerful magic. The troubling part is that while ensnared Theron retains consciousness and an arguable amount of free will to fight the compulsions he’s experiencing. There’s no way to brush off what happened in that scene between him and Genevieve as anything other than sexual assault, and I wish those three lines had been left out of the scene entirely.

Barring that one instance, I highly enjoyed reading The Fall of the Kings. Already, Ellen Kushner’s city with its rough neighborhood of Riverside, its nobles on the Hill, and its University feels welcoming and comforting in how familiar it seems. There’s so much attention paid to detail in The Fall of the Kings, and so much care taken with its characters and their motives, their friendships, and the intimacies they share with various loved ones, sexual or otherwise. I may even slightly prefer this book to Swordspoint (though I’m not ready to stake my life on it just yet), because it concerns itself with my own fascination of the construction of history and myth and the intersection of scholarship with governance, and how each validates the other’s existence. I’m eager to continue with Kushner’s third Riverside book, The Privilege of the Sword.

1 thought on “Review: The Fall of the Kings by Ellen Kushner and Delia Sherman”