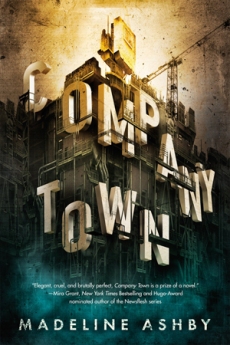 Go Jung-hwa is a rare bird in the oil-rig city of New Arcadia—she’s an “organic,” the only person with no genetic modification, digital implants, or bionic enhancements. An unplanned, unwanted, and scorned daughter, marked with a scarlet stain on half her body due to the congenital disorder Sturge-Weber, Hwa’s unedited appearance doubly marks her as an outsider on the rig, where everyone modifies their bodies, whether for beauty or health, and utilizes implanted tech to communicate, access information, interact with the city at large … or to murder

Hwa has made a name for herself as a top-notch fighter, and she has a solid job with the city’s union for sex workers as a bodyguard. Her name becomes even more valuable after the astronomically powerful Lynch family buys New Arcadia, whose oil rig determines that of the city’s. The head of the Lynch family hires Hwa to bodyguard his youngest son, who is also his heir. Because Hwa is an organic, she can’t be tracked or controlled through implants, and the stain on her face distorts facial recognition software. Hwa is charged with protecting Lynch’s heir from assassination by a killer who Lynch believes is threatening his son from the far future.

No sooner does she accept when a serial killer begins targeting residents of New Arcadia—former charges from Hwa’s old job. Hwa is now on a mission to track down those responsible for threatening the safety and future of New Arcadia and for daring to mess with the people Hwa swore to protect at all cost.

There is a lot going on in Company Town—two sets of murder mysteries, the Lynch’s plans for New Arcadia, the world-building behind this iteration of a cyberpunk future, Hwa’s own background, who she is, and how her new circumstances are changing her priorities and the way she ses herself—and somehow it all fits together into a remarkably compact novel. (It clocks in at 285 pages.)

Similar to Ellen Kushner’s Swordspoint, Madeline Ashby drops readers right into the middle of Company Town’s action and challenges readers to keep up with the ride as Hwa navigates her technologically enhanced city and its associates as an organic. On the one hand I appreciate when authors refuse to treat readers as unable to handle anything complicated in their fiction. On the other hand I loved the details behind the world-building—the genetic editing, the implants, how their existence and people’s usage of them intersected along lines of gender, class, race, job, economy, physical and social environment, etc.—but because the story is limited to Hwa’s immediate perspective, there’s no chance to settle down or luxuriate in the whats, hows, whys, and wherefores of the cool world-building. Everything the reader comes to learn is through subtext gleaned through Hwa’s immediate thoughts and interactions in a given moment.

Ashby writes her story in a bare-bones manner that doesn’t actually skimp on world-building or characterization but also doesn’t leave anything left-over for lollygagging over anything not one hundred percent relevant to the story at hand. It’s a perfectly reasonable writing method, but I did mourn not having that chance to luxuriate in what is some really thoughtfully considered technology (and technology uses) and visually evocative world-building.

Go Jung-hwa, who goes by Hwa, is as top-notch a character as she is a fighter. Outwardly Hwa is the definition of strong—she has a forceful personality, a will of steel, and she doesn’t let assholes get away from her unscathed. She’s also incredibly protective of all her charges, which includes Joel, the seventeen-year-old Lynch family heir who’s a bright, eager-to-please kid who has zero knowledge of self-defence, and the women she guards while working for the sex workers’ union. Hwa is also hyper-aware and self-conscious of how she doesn’t fit in with the rest of the city, visually and physically. Hwa’s lack of implants and enhancements makes her invisible to anyone who does have implants (ocular implants “edit” Hwa’s stain out of people’s’ vision) and unable to be seen or recognized by facial-recognition-based tech because of her stain on her face. On the other hand, the stain makes her genetically unedited, unmodified body hyper-visible to anyone who looks at her with their naked eye.

As such, Hwa lives a double, paradoxical life—unseen by all technology (and therefore by all other humans) and seen to the point that her stain becomes the only part of her people will focus on. She’s edited out because of her stain, but because of her stain, she can’t be edited out. Hwa’s dual state of existence is her personal source of weakness when it comes to how much worth she places on her own life, but it’s ends up becoming one of her greatest strengths by the story’s end.

(Speaking of which, I still don’t really get how the climax went down—everything became to slipstream-y, wibbly-wobbly timey-wimey, space-time-parallel-alternate-futures-continuum-y for me to fully follow the Big Reveal and denouement.)

This transitions into two narrative concerns I had with Company Town. And this is where i’m going into spoiler territory.

The first is with the healing of Hwa’s Sturge-Weber, including her stain, in the last chapter. I’m not as familiar with tropes concerning the portrayal of disability in fiction. If I didn’t miss or misread anything, the reason for Hwa’s having Sturge-Weber at all was because her mother, and then Hwa herself, never had the money to genetically edit Hwa’s genes to erase the condition either in utero or after birth. However it’s unclear whether current biotechnology would have been able to cure Hwa’s Sturge-Weber or if the cutting-edge Krebs nanotech Hwa unknowingly becomes “infected” with is the only reason for the cure. Plot-wise it makes sense that Hwa would now have the Krebs nanotech since it spreads through blood contact, and she had sex with Daniel, who also had the nanotech. Narrative-wise it felt like a one-eighty that Hwa’s stain and the disease she had defined herself by all her life, both for bad and good, disappeared.

On the other hand I could also read the “transformation,” such as it is, as another kind of paradox with regard to the porous boundaries defining “humanity.” In Company Town, where biotech and implants are so baseline common that they’re expected, the baseline for what “human” is has also changed—Hwa, as an organic, could be considered less human than everyone else, simply by virtue of being the only person in the city completely divorced from internal tech. At the book’s end when she’s in possession of the Krebs nanotech, which not only eradicates her condition but is capable of resurrecting her from just about any kind of death, Hwa has simultaneously joined the ranks of defined-humanity on New Arcadia while in reality advancing herself and her body far beyond the capabilities and extent of interference of everyone else’s bodies and tech.

(There’s also something to be said for what occurs during the climax and how it plays out contributing to the fluctuating and varying definitions of humanity in relation to technology, but since as I mentioned earlier I still barely understand what even happened, I’m not going to go there.)

My other concern is with the role the sex workers play in the narrative. In this time and place, sex work is decriminalized and is a fully protected line of work, complete with established rates of pay, health care, pensions, and security systems in place to aid sex workers in screening potential clients and perma-banning violent or dangerous clients. Before Hwa started working for the Lynch family, her job was to guard sex workers out on jobs, and she also taught them self-defense. Many of them—Eileen, Calliope, Sabrina—are friends of hers. And when the serial murders start occurring about a third of the way through the book, the victims are all sex workers or people employed by the union, all of them connected in one way or another to Hwa.

Like with disability narratives, my exposure and understanding of nuances regarding portrayal of sex work and workers is limited by my own distance from the matter. Still I didn’t understand (and still don’t really) why Ashby made a specific effort to write about sex work in a positive and reasonably ideal light, wherein sex workers aren’t denigrated, their jobs are treated with respect, and they’re written as regular, ordinary people, and then have all those characters be killed, when sex workers are killed off all the time in fiction. If you’re going to not write sex workers or sex work in a lazy manner, why write the plot and characters such that it seemingly necessitates the trope of the serial killer who targets sex workers?

I could see it as Ashby deliberately writing it this way in order to skewer the trope, since all of the sex workers in Company Town are fully fledged characters who aren’t defined solely by their job, they aren’t blamed for their deaths, and the deaths are never cast aside or treated as inevitable. The reason for their deaths ends up being because they were Hwa’s friends, and someone attacking the people she cares about and was supposed to protect means she’s going to fight like hell to get whoever’s doing it. I’m still ambivalent about the matter, and I would have preferred for their to be sex workers engaging in decriminalized sex work and playing important roles in the plot that didn’t involved their murders.

Company Town is a hard, fun read. It’s bold storytelling that takes risks and world-building and characters that are intriguing thoughtfully realized, and plain old cool and badass. Hwa and her determination, her work ethic, her commitment to protecting those in her care, and her struggle to live amidst technology that insists she doesn’t, and shouldn’t, exist is what makes this book sing. I had concerns with a couple elements of the narrative, which I discussed. This is a book that made wrestle with it on every page, and for that, I do appreciate it.