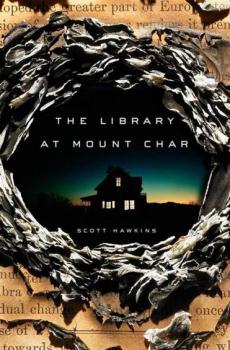 The Library at Mount Char is easily the strangest book I’ve read in 2016 by far. It’s also super cool and fun and genre-defying.

There are homicidal librarians. Who rule the universe.

I mean, do you really need anything else in your fiction? Because I’m pretty sure you don’t.

Carolyn is a librarian, but she isn’t the normal, checking-in-books, reference kind of librarian. After Carolyn’s parents died when she was eight, she and eleven other children spent the next several years studying under the tutelage of a figure they call Father—who is essentially God. He gives each child a catalogue to study and master—Carolyn’s is that of language, from French to Japanese to the language of wild animals and squalls on Jupiter—and he teaches them in ways that are cruel, obscene, and highly effective. And from his teaching Carolyn and her siblings learn to master incomprehensible, powerful forces and to bend the very existence of the universe to their will.

But now Father is missing, maybe even dead … except he’s Father. No one can kill Father. And in his absence, a power vacuum has emerged that could destroy the entire universe. But Carolyn has had a plan since before Father’s absence, a long game that no one could ever have followed. But this plan carries risk, for humanity, for the universe, and, most importantly, herself.

Thinking about The Library at Mount Char, the only books that make any remote sense comparing it to are the Kate Daniels urban fantasy series by Ilona Andrews. Both feature a cosmic, all-powerful entity, a less powerful but no less dangerous protagonist seeking to master their “father’s” arts, and the casual, mundane acceptance of terrifying phenomena like the death of the universe with a shrug and a “Yeah? This is scary how? Don’t worry about it, let me just rewrite time. There, problem solved!”

This book is dark. From the very first chapter, dark, crazy, terrifying shit happens and happens and continues to happen all the way to the end. And it’s the casualness of it all that makes it so dark as well as unsuspectingly pleasurable to read. It’s excellent juxtaposition of the fantastic—what is your normal? It can be a typical day in the life of a working-class plumber in Virginia, and it can also be a day studying the language of squalls and watching your brother get roasted alive in a cast-iron bull over the course of a day and a half and then helping your sister to resurrect him from death—all of which Father ordered done and the siblings complied.

Given the gulf in experiences, it’s no wonder that Carolyn’s understanding and processing of typical human concerns and understanding of life and the universe are so cockeyed it’d be hilarious, if it didn’t have dire consequences for those humans who get roped into working with her. Scott Hawkins is surprisingly good at character voices in setting up this juxtaposition—it’s black humor, and it’s meant to be, because otherwise this book would be too horrible for words, but at the same time the stakes of this book are the chaotic destruction of life, death, sanity, and existence. Y’know, the usual.

And it’s not just the juxtaposition of the fantastic and mundane for the characters, it’s the juxtaposition for the reader as well. The Library at Mount Char dispenses with typical narrative expectations of what Supreme Power and Cosmic Entities look like, how they speak, and what sort of lives they lead and names they have. (Some of the off-page entities Carolyn battles are named Leisl and Q-33 and Barry O’Shea, and we have zero clue who or what they are, except that they are powerful and need to be dealt with.) There are snippets and hints concerning the greater mythology of the surrounding universe Father and his students and even Earth exist in, and it’s meant to not make sense to anyone who isn’t Carolyn or Father or any of her other siblings.

Speaking of which, Carolyn has some fucking terrifying siblings (some more so than others). There’s David, whose catalogue is War, and is the world’s deadliest and most maniacal killer, constantly covered in blood, and he does it all while wearing a tutu; Margaret, whose catalogue is Death, who’s been murdered and resurrected herself so many times that she’s barely alive herself, and more than a little insane; Michael, whose catalogue is Animals, and who’s now far more comfortable living among them and speaking their language than speaking and interacting with other humans, as a human.

(Scott Hawkins has written a funny, spoiler-free primer of the librarians and their various catalogues. Also the writing gives you a sense of what you’re in for with the book.)

Carolyn is one of the more “normal” of Father’s students, i.e., she can walk into a bar and more or less maneuver her way around and not appear too kooky to regular humans. I really enjoyed Carolyn’s voice and the calm manner with which she thinks and plans and explains, underlaid with a will of ice and steal and vengeance. It takes a few chapters to get fully into, and the flashback chapters embedded into the narrative helped a great deal to normalize the universe Father and Carolyn and her adopted siblings live in. I loved her perspective so much that I would have preferred more of the chapters were told from it rather than the aforementioned humans who get roped into her plan, particularly in the book’s middle, where it drags a bit.

Also, have I mentioned that The Library at Mount Char is a debut? The scope of the plot and premise is highly ambitious, and it’s executed flawlessly. Scott Hawkins never loses sight of the narrative or its end-game, and he makes the story truly unpredictable in ways that were immensely satisfying. This is one of those novels where at the end so many puzzle pieces click together to create that amazing feeling as you read that you are experiencing the work and talent of a masterful storyteller telling an incredible story.

I very much loved reading The Library at Mount Char, and even now several weeks after finishing it I’m still thinking about how much I loved the experience of reading it, and how I’d love to go back someday and reread it. It’s a weird book, and it’s weird in the best possible way.

1 thought on “Review: The Library at Mount Char by Scott Hawkins”