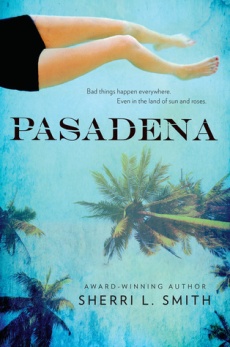 Maggie was the glamorous, larger-than-life, shining star all her friends revolved around. Maggie was Jude’s best friend, the only one she told her secrets.

Now Maggie’s dead. Her body was found floating face-down in her family’s pool. Drowning? Overdose? Suicide? No one knows.

No one except for Jude. Jude knows it was murder. And as she investigates Maggie’s friends and family, the facade Jude had built around Maggie while she was alive starts to crack open. And, unwillingly so, does Jude’s armor as she comes head-to-head with her past.

Pasadena is a noir YA novel clocking in at a breezy 228 pages. I’d read Sherri L. Smith’s apocalyptic/dystopia novel Orleans and was a huge fan, but hadn’t read anything of hers since, and so I was curious to see what kind of noir story she would write.

228 pages and a week and a half later, I have little to say about it. It’s engaging overall, and the writing style and atmosphere is suitably noir-y. The scorching-hot, tinder-pile of a city that is Pasadena and the outskirts of L.A. is evocatively rendered, and the over-bright sunniness of the setting is effectively utilized in direct opposition of the hidden, shadowy secrets scattered throughout the book.

I really liked the portrayal of Jude and Maggie’s friendship through Veronica Mars-esque flashbacks. (And if you like Veronica Mars, there’s a good chance you’ll enjoy Pasadena). I especially liked the mystery that was Maggie Kim, a rich, confident, melodramatic glamorous girl, the glue that kept her friends together, the balm that soothed and assured them they mattered and their troubles had answers.

The dealbreaker is the climax—it negates the entire purpose of the story being a noir. (Highlight for spoilers.) Dead people don’t commit suicide in noir—other people kill them. Even though Maggie’s death was aided and abetted by an outside figure, it’s still suicide. All this tension had been built up about what kind of person Maggie was, what secrets of her own she was hiding, the closer Jude gets to solving the mystery of Maggie’s death, and what ended up being the big reveal deflated that tension, big-time. The more I think about it, the more frustrated I am.

My disappointment with the ending has colored my overall feelings towards Pasadena. Other readers may appreciate the book as a contemporary YA exploring friendship, loss, and sexual assault with zero gloss. I picked up Pasadena for the promise of a noir story, and IMO it did not live up to its advertising.